Kerala, a state on India's tropical Malabar Coast, has nearly 600km of Arabian Sea shoreline. It's known for its palm-lined beaches and backwaters, a network of canals. Inland are the Western Ghats, mountains whose slopes support tea, coffee and spice plantations as well as wildlife. National parks like Eravikulam and Periyar, plus Wayanad and other sanctuaries, are home to elephants, langur monkeys and tigers.

Kerala is the land of kera or coconut. It is a never-ending array of coconut palms; sun blanched beaches… enchanting backwaters cruised by kettuvallams (rice barges); magical monsoon showers; rich diversity of flora and fauna; misty mountains of the Western Ghats; fragrance of spices and a plethora of art forms; fairs and festivals..... Welcome to God's Own Country - Kerala. Origin of Kerala has been linked to a legend, which says that Kerala rose up from the sea when Lord Parasurama threw his axe into it and the sea receded to bring up this narrow strip of land from underneath. Lord Parasurama, believed to be the sixth avatar of Lord Mahavishnu, threw his axe from Gokarnam southward across the ocean in rage and in repentance for his actions of killing the kshatriyas. The land of Kerala emerged from the waters of the Arabian Sea with the blessing of Varuna - the God of Oceans and Bhumidevi - the Goddess of Earth. 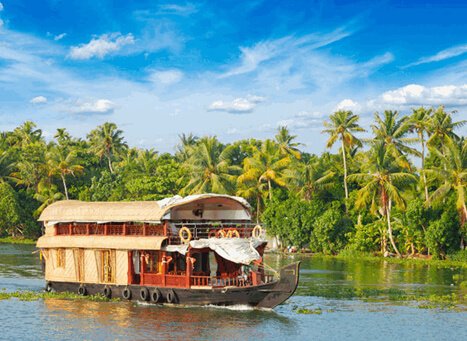 The backwaters are a peculiar feature of the State. Canals link the lakes and backwaters to facilitate an uninterrupted inland water navigation system from Thiruvananthapuram to Vadakara, a distance of 450 km. The Vembanad lake stretching from Alappuzha to Kochi is the biggest water body in the State and is over 200 sq.km in area. Kuttanad in Alappuzha district alone has more than 20 per cent of India's total length of waterways.

The important rivers from north to south are; Valapattanam river (110 km), Chaliar (69 km), Kadalundipuzha (130 km), Bharathapuzha (209 km), Chalakudy river (130 km), Periyar (244 km), Pamba (176 km), Achancoil (128 km) and Kalladayar (121 km). Other than these, there are about 35 small rivers and rivulets flowing down from the Western Ghats. Most of these rivers are navigable up to the midland region, in country crafts.

Kerala lies along the coastline, to the extreme southwest of the Indian peninsula. It is flanked by the Arabian Sea on the west and the mountains of the Western Ghats on the east. This land of Parasurama stretches north-south along a coastline of 580 km with a varying width of 35 to 120 km. Cascading delicately down the hills to the coasts covered by verdant coconut groves, the topography and physical characteristics change distinctly from east to west. The nature of the terrain and its physical features, divides an east west cross section of the State into three distinct regions- hills and valleys, midland and plains and the coastal region. Located between north latitudes 8018' and 12048' and east longitudes 74052' and 72022', the State of Kerala encompasses 1.18 per cent of the country.

The Western Ghats, bordering the eastern boundary of the State, form an almost continuous mountain wall, except near Palakkad where there is a natural mountain pass known as the Palakkad Gap. The average elevation of the Ghats is about 1500 meters above sea level, occasionally soaring to peaks of 2000 to 2500 meters. From the Ghats, the land slopes to the west on to the plains, into an unbroken coastline. 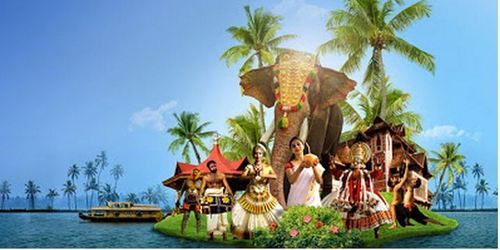