(Diu) Sightseeing and activities around Diu Sightseeing around Diu includes Nagoa Beach, St. Pauls Church, Diu Museum, Diu Fort. Watersports include Para Sailing, water skiing, water scooter, Family boat and speedboats are on offer at Ahmadpur Mandvi beach. ( Diu- Gir) Travel to Sasan Gir via Somnath. Evening Safari in Sasan Gir. Proceed to Sasan Gir (120 kms – 3 hrs). Sasan Gir is only abode of Asiatic Lions and considered excellent for bird watching. The park checklist has 250 birds and about 50 other species (including the endangered lesser florican and the saras crane) are recorded in the grasslands along the periphery of the sanctuary. Evening Safari in Gir. 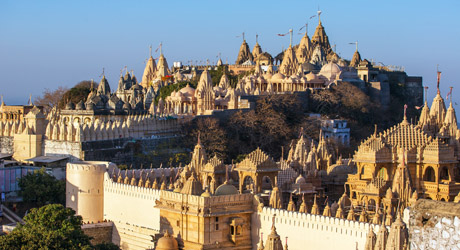 Palitana is a town in Bhavnagar district, Gujarat, India. It is located 50 km southwest of Bhavnagar city and is a major pilgrimage centre for Jains. It is first of the two vegetarian cities in the world.There are in total 863 temples from base to the peak of the Shatrunjaya hill, where the Palitana temples are located. The path is climbed through 3950 steps spanning 3.5 km up the Shatrunjaya Hills.

Palitana, or Shetrunjaya Hills Temple complex is one of the largest and most important temple complexes for Jains in western India. The others being Mt Girnar and at Mt Abu. Reachable by climbing close to 4000 steps, leads you to a the magnificent temple complex. The temple opens at sunrise, typically between 6 to 7 am and shuts by sun set again around 5 to 6 pm. No night stay allowed.
Good climb. Many resting places along the way. Highly recommended.The town in the foothill offers multiple stay and eating options.

The construction of temples of Palitana spanned over a period of 900 years and was structured in two phases. From the 11th to12th centuries AD as a part of the resurgence of temple building all over India, the first phase of temple architecture was constructed. The second phase followed later, from the 16th century AD onwards. Muslim invaders destroyed some of the earliest temples built in the 11th century AD, during the 14th and 15th centuries AD. No one person can be attributed for the construction of these magnificent temples rather it was the effort of the wealthy businessmen who were followers of Jainism.

Dwarka is believed to have been the first capital of Gujarat. The city's name literally means the "gateway to heaven" in Sanskrit, as Dwar means "gate" and ka references "Brahma". Dwarka has also been referred to throughout its history as "Mokshapuri", "Dwarkamati", and "Dwarkavati". It is mentioned in the ancient prehistoric epic period of the Mahabharata. According to legend, Krishna settled here after he defeated and killed his uncle Kansa at Mathura. This mythological account of Krishna's migration to Dwarka from Mathura is closely associated with the culture of Gujarat. Krishna is also said to have reclaimed 12 yojanas or 96 square kilometres (37 sq mi) of land from the sea to create Dwarka.

Dwarka is an ancient city in the northwestern Indian state of Gujarat. It’s known as a Hindu pilgrimage site. The ancient Dwarkadhish Temple has an elaborately tiered main shrine, a carved entrance and a black-marble idol of Lord Krishna. Dwarka Beach and nearby Dwarka Lighthouse offer views of the Arabian Sea. Southeast, Gaga Wildlife Sanctuary protects migratory birds and endangered species like the Indian wolf.